By Matt Melzer of TrainWeb.com 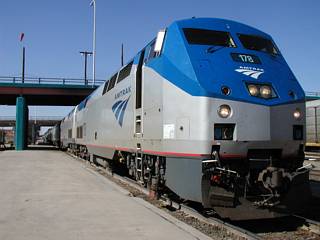 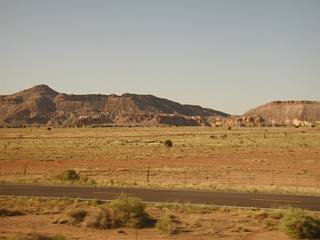 After having arrived in Chicago on the substitute Greyhound bus from Indianapolis (from the final Kentucky Cardinal from Louisville), Krista and I walked to the Chicago Metropolitan Lounge to check in with the same attendant who boarded us early on train 851 two days previous. We stored our bags in room 341, and settled into a couch before the lounge became completely full for the afternoon departures. Krista gave me money to fetch lunch, and I got us tasty turkey and swiss subs from Nino Panino's, in the Union Station food court, which is frequented by locals. The Cardinal and Kentucky Cardinal arrived at 1:55 PM, which still would've given us plenty of time to catch train 3, the Southwest Chief, at 3:15 PM, but we understood the uncertainty of the situation and the risk that might've existed had we stayed on the train. We played computer games as we watched passengers from the Empire Builder, California Zephyr, and Texas Eagle depart. 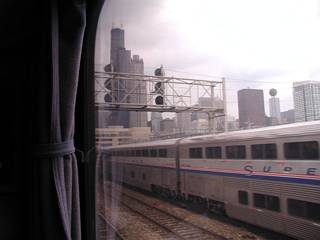 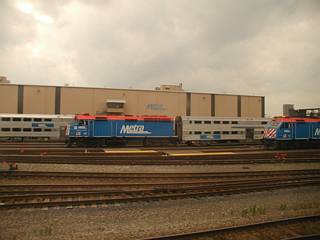 There was a delay in delivering the equipment for train 3, and we did not board until 3:45 PM. We were greeted at our 330 sleeper by our attendant, Chuck. This particular Superliner I sleeper, 32026, was thoroughly reconditioned, with decor and facilities as good if not better than that of Superliner II. However, our car was not one of the new refurbishments, as were none of the other cars on our train. We got settled into standard bedroom 6, and our train departed at 4:09 PM, fifty-four minutes late. We stopped briefly at 21st Street to pick up the mail and express cars, and we were soon on our way. The dining car steward gave us dinner reservations for 6:30 PM. Before dinner, we walked to the rear of the train to get some exercise, and were seated just after 6:30, with a minister from Kansas City and a teacher from Los Angeles. Krista had the Seafood en Brochette (seafood and vegetable skewers), while I had the flavorful Cornish Game Hen with extra rice pilaf.

Just after we returned to our room, the train crossed the Mississippi River into Iowa, and we took another walk to burn off some calories and so I could record the consist. We started by walking forward to the 331 sleeper, and I was surprised to see that there was no Transition Dorm or crew car of any sort. The attendant told us that she had two crew members housed in her car, and the rest were, presumably, distributed through our sleeper and the 332 sleeper on the rear. The 331 sleeper's position, however, was unique in that it allowed for a clear view forward, over the baggage car and almost in front of the engines. Walking to the rear, we were stopped by the attendant in the 332 sleeper, who told us we couldn't go any farther. We explained that we were first class passengers and that we were entitled to walk the length of the train. He begged to differ, saying that his passengers wouldn't appreciate it and that we wouldn't appreciate it if his did the same. I said that, in fact, I would have no problem with other first class passengers walking through my sleeper. I did not care to fight any longer, so after returning, I told Chuck what happened. Chuck, who had worked for Amtrak for 16 years, confirmed what I already knew: That the other attendant was wrong, and that he was rude. Chuck explained that the other attendant had only been working for 6 months, and that he would give him a talk. We greatly appreciated his caring sense of duty to set the other guy straight. Our train 3's consist went as follows: 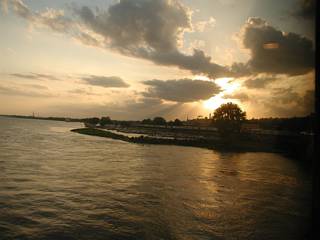 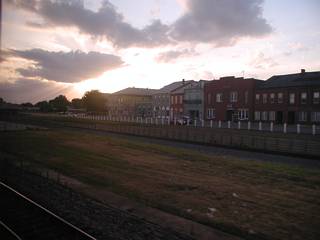 Because we were so tired from our strenuous trip on the final Kentucky Cardinal, we opted to go to bed early. After showering, we went to sleep at 10 PM. I had wanted to stay awake to see the newly renovated and reoccupied Kansas City Union Station, but because of our tardiness and my own health considerations, I concluded that it wasn't worth it. This time, I took the lower bunk and Krista took the upper bunk. 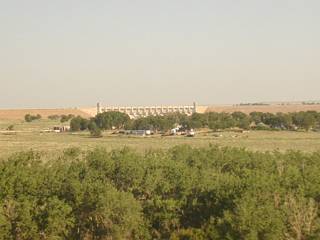 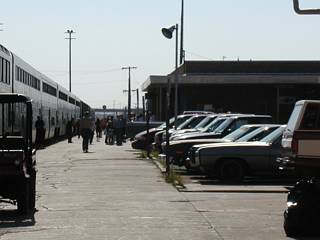 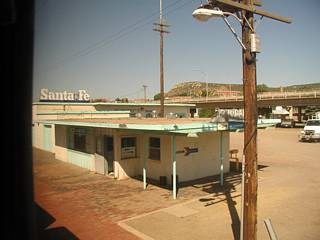 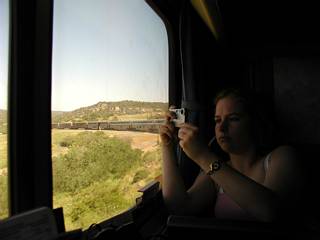 We both slept soundly through the night, waking up at 7 AM Mountain Time, having gotten ten quality hours of well-deserved sleep. After the station stop at Lamar, Colorado, went to have a breakfast of eggs, sitting with and across from a large family from Riverside, California. We briefly stepped off at La Junta to get some fresh air and take a few pictures, then spent the balance of the morning doing computer work, even as we wound down the scenic Raton Pass. By the time the train arrived in Raton, New Mexico, we were fifteen minutes early, more than having made up for our tardiness. We stepped off to take some pictures. A large Boy Scout troop from St Louis detrained to go to the Philmont Scout Ranch, as usual for this time of year. We departed at 10:57 AM, exactly on-time. 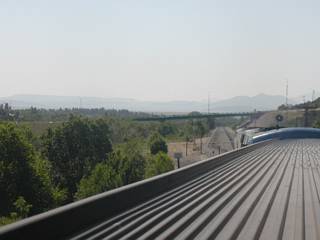 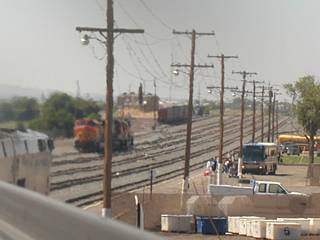 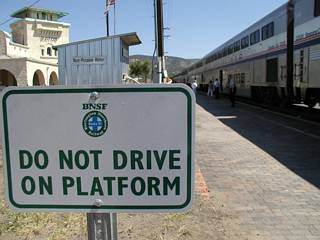 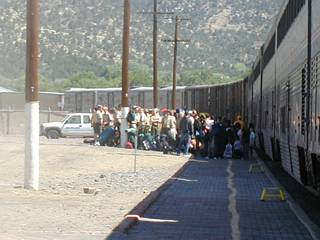 We went to lunch at about noon and were seated across from yet another teacher from Los Angeles (who happened to know the band director from my old high school) and his wife. Krista enjoyed the grilled chicken sandwich, while I had the Gardenburger. During lunch, we stopped in Las Vegas, NM, whose station is undergoing restoration. Hopefully La Castaneda, its famed Harvey House, would be next. We arrived into Lamy for our first stop of the necessary double-spot just as our eastbound counterpart, train 4, was completing its second stop, about fifteen minutes late. Lamy is the connection to the Santa Fe Southern Railway to the New Mexico capitol city of Santa Fe, but any view of SFS equipment was blocked by train 4 as we arrived. We departed Lamy on-time at 2:35 PM. If we were to arrive into Albuquerque within the normal running time, we would have a layover of an hour and forty minutes, which could give us ample time to explore the area! 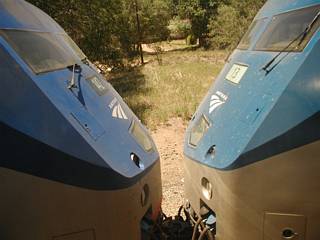 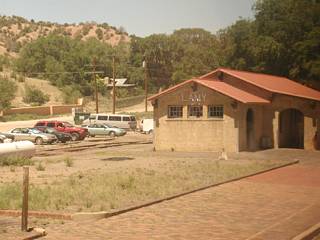 Despite two speed restrictions of 40 mph in 90 mph territories, my expectation was met, and we arrived into Albuquerque at 3:39 PM, twenty-nine minutes early, and an hour forty-one minutes before the scheduled departure time of 5:20 PM. We stepped outside into the blazing but dry desert heat (a far cry from the milder but far more humid midwestern heat). Our throats were parched, and we went to a local restaurant for some refreshments to give us energy and motivation to walk around and explore the local area. We returned to the station in time to take a few pictures and do some computer work before an on-time departure at 5:20 PM. A red signal at MP 902, however, stopped us momentarily, until we were all clear to highball. We soon passed Superliner I Coach 34063, which must have been bad-ordered and set out from the Southwest Chief sometime recently. Hoss Mann, the witty lounge attendant, soon announced that Nando, one of many Native American guides that ride the Southwest Chief, would be providing commentary until Gallup. 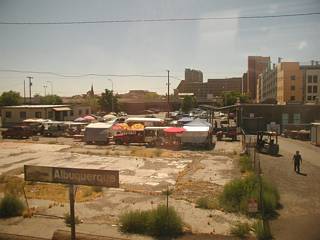 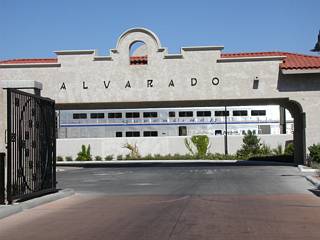 I was soon overcome by a terrible feeling of pain in my neck and lower back, accompanied by exhaustion. I had thought the rapid changes in temperature were simply making my body feel off-equilibrium, until I got a sore throat and the chills. Krista and I knew I was in trouble, and my "vacation" abruptly ended. Krista selflessly took care of me, and our car attendant, Chuck, was kind enough to bring two Ravioli Primavera dinners to our room, where we stayed for nearly all of the rest of the trip. I had obviously overexerted myself and likely caught a virus riding in the hot, humid, stagnant air of the Kentucky Cardinal, giving me a morbid sense of personal satisfaction that this route was history. As the saying goes, it was no way to run a railroad. 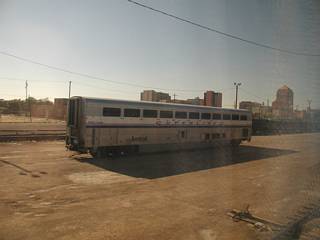 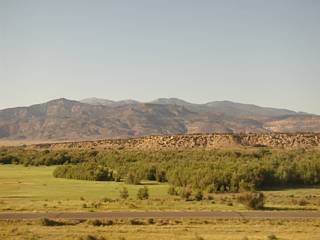 We went to sleep after Flagstaff, waking up during our twenty-minute-late stop at Barstow at 4:15 AM, and sleeping intermittently until our stop in San Bernardino, when Chuck announced that he would be coming by our rooms to collect the linens. We cleaned up the room, packed our bags, and did our best to get dressed (Krista was slightly under the weather as well). There was a delay in Riverside waiting for Metrolink traffic to clear during the morning rush hour. As we arrived into Fullerton, Chuck announced the stop as "Republicanville" and proclaimed that it was his hometown and that California State University Fullerton is his alma mater! Too bad I was too ill to think to ask him if he had ever visited TrainWeb's office, before or since we took occupancy! Despite the stop in Fullerton over an hour late, schedule padding helped us arrive into Los Angeles Union Station at 8:29 AM, eleven minutes early. We had planned on taking the Metro Red Line subway home, but my health considerations compelled us to take a taxi. The driver got us home within forty minutes, a reasonable amount of time for rush hour. While it was unfortunate that the exciting trip to cover a very historical event had to end on such a sick note, the journey and the experience still proved to be worthwhile.

Click here for the previous segment of this travelogue:
The Final Run of the Amtrak Kentucky Cardinal

Are you interested in rail travel along some or all of this journey yourself? There are very few travel agents that have the necessary knowledge and experience of rail travel to answer your questions and to book a journey that you will remember for a lifetime. TrainWeb has sought out those travel agencies and rail tourism companies that not only have the knowledge to book your travel, but have gained the required experience through extensive rail travel themselves! Click here or visit RAILagencies.com or RAILexcursions.com for a list of these rail travel providers!